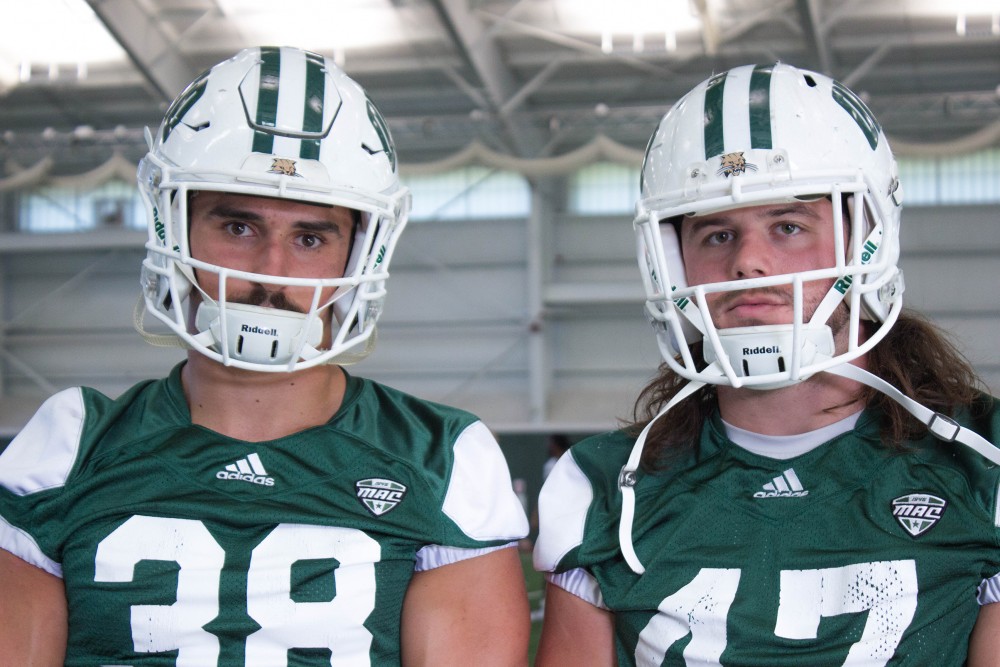 Chad Moore and Evan Croutch pause for a photo on the way back to the locker room after practice.

The day was Aug. 4, Bobcat Media Day at Peden Stadium, and the Ohio linebackers had their annual funny picture to take.

Last year the group did a cheerleader pyramid, but this season would have a different picture. With Austin Clack on one end and James Leyden on the other, the group locked hands and jumped in the air together as it mimicked a group of sorority sisters.

Each player wore a smile or showed some form of amusement — Chad Moore and Cody Grilliot stuck out their tongues.

The Ohio linebackers are silly, but they’re proud of that.

It’s an identity the group has created among the team, and, because of that, the players in the unit aren’t afraid to be themselves.

The linebacker meetings are not boring. The group designates a player to begin most meetings with a riddle. Dylan Conner has been that designated player lately, and the rest of the Bobcats have tried to figure the riddles out.

Mundaneness is certainly not evident in this group. Moore and Quentin Poling crack jokes minutes before games, but when it’s time to play, they’re serious.

The group’s capability to balance having fun with being serious puts it in position to perform well on the field.

“Leading up to it (a game), though, you gotta relax, not get all tense,” Moore said. “Because when you do, that’s sort of when you do mistakes, get nervous.”

The Bobcats are around one another frequently, whether it’s in meetings, on the field or even at home. Moore and Poling live together in an apartment. And last Sunday, the group — save for Jacob Koons, who was attending a birthday dinner for his mother — went to Croutch’s house for dinner.

Croutch was on the charcoal grill with Grilliot, and, though Grilliot is a respected cook, it was the first time the group saw Croutch on the grill. Moore said the hamburgers and bratwursts were good.

“But it’s kind of hard to mess up a hamburger and brat, that’s the way I look at it,” Moore said. “Cook a steak for me.”

Along with eating burgers and brats, the group played cornhole and table tennis to end the weekend. The players took a break from football and studying, continuing to foster their close-knit culture.

Linebackers coach and co-defensive coordinator Ron Collins and his wife, Sharon, occasionally have the unit over for dinner at their house, too.

Chemistry — whether on the field, in meetings or both — is important for the Bobcats. Some players could legitimately not like one another. But that’s not the case for Ohio.

“I’ve had some guys that have not been good in there (the meeting room), and so it just makes the whole thing a little sour,” Collins said.

Collins wants a multitude of personalities in his group. He doesn’t want guys who are “cookie cutters,” or players who don’t show their true selves. For the redshirt freshmen, showing their true selves didn’t come immediately last season.

They were shy and sat straight-faced in meetings while the older linebackers cracked jokes.

Eventually, though, the young linebackers started to crack jokes, too.

“They kind of finally realized that this is how it is,” Moore said. “To just be able to get through football, you gotta have some comedy.”

And comedy is a surplus for the linebackers. The group even has nicknames for one another.

One day, Moore was looking at Conner and called him a “Berry.” Eric Popp is called “Popsicle,” and Jared Dorsa is called “Meat Sauce.” The latter is because one day, Moore and some linebackers saw him in a dining hall with a bunch of meat sauce on his spaghetti.

And then Dorsa was also given the nickname “Mustard” because he had a hotdog with an absurd amount of mustard on it.

In addition, Grilliot is called “ ‘Squatch” because he has a lot of hair. Marcus Brunson is called “Dolphin” because he likes dolphins — he also has a snake.

While the linebackers aren’t afraid to show their personalities, they are not averse to being serious as well. The lively meetings, the funny nicknames — those things contribute to the group’s identity.

But when it’s time to be serious, the Bobcats are. And that’s why their goofiness isn’t looked down upon.

“I think we just have a lot of really good leadership in the room,” Grilliot said. “A lot of different personalities, but all those personalities kind of gel together good.”