In a Top-10 match-up Friday afternoon, No. 5 Ohio State handled business against No. 10 Stanford. Thanks to Kelsey Mitchell’s 30-points (now second in OSU history in scoring) and Stephanie Mavunga’s career and school best 26 rebounds, the Buckeyes tallied their first win of the season. 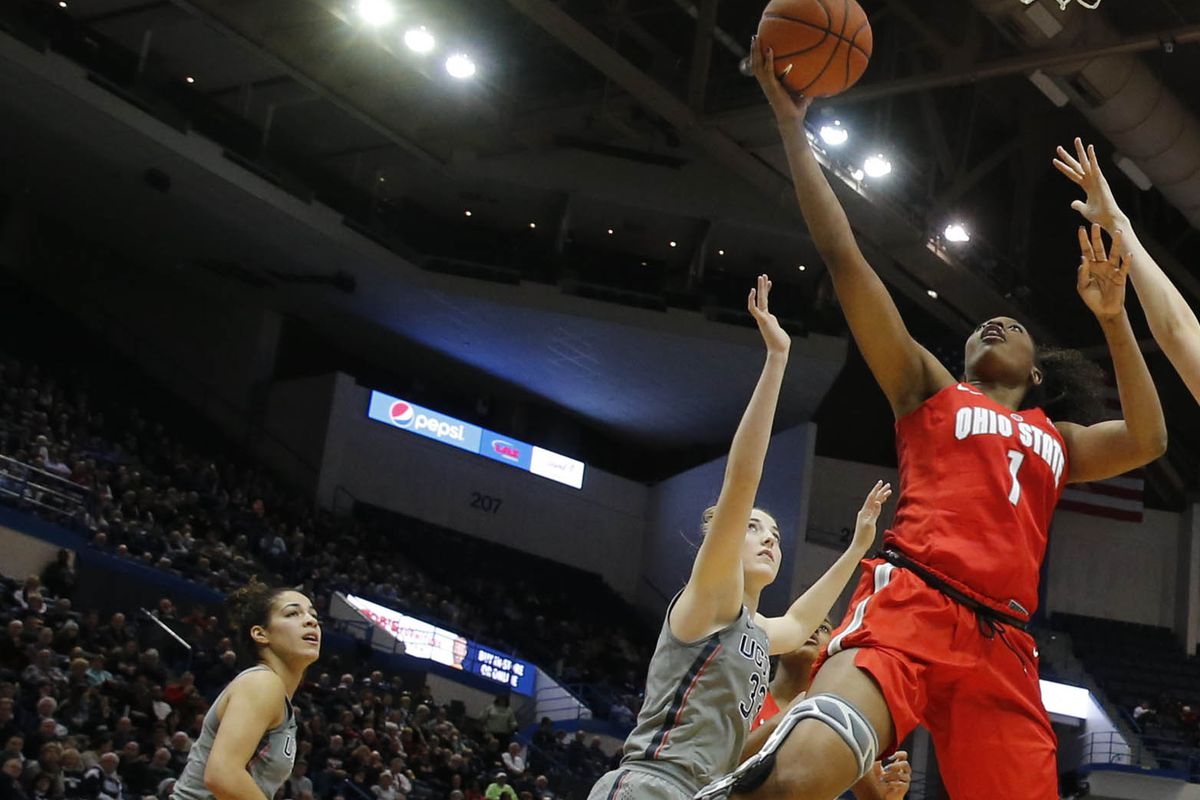 Columbus, OH — Stephanie Mavunga knows she can control whether she grabs a rebound or not.

Mavunga, a redshirt senior forward for Ohio State, knows she can’t control getting the ball or finishing shots. But she can rebound the ball.

No. 5 Ohio State defeated No. 10 Stanford 85-64 on Friday in St. John Arena. The Buckeyes didn’t shoot that well, but they did have 64 rebounds. Mavunga had 26 of those, breaking the single-game record that Mary Sivak held in 1979.

The thought of grabbing rebounds is stuck in Mavunga’s mind. Coach Kevin McGuff makes sure she knows to rebound every day. Mavunga even receives text messages in the middle of the day from associate head coach Patrick Klein that tell her to rebound.

She knows to rebound like a squirrel knows to gather nuts for the winter.

Anytime the ball came off the rim, Mavunga seemed to be there, ready to put the ball back in the hoop. She fought for offensive rebounds down low, grabbing 14.

And when she had a chance to score off a putback, she usually did. Mavunga had 17 points. The Buckeyes shot 34.3 percent from the field – they didn’t have a good shooting night.

But because of Mavunga’s intensity down low, the Buckeyes were able to stave off bad possessions. The Buckeyes finished with 28 offensive rebounds.

“We got so many extra possessions it allowed us to kind of look good offensively with what we scored,” coach Kevin McGuff said. “But really it wasn’t a very efficient offensive night for us.”

McGuff said that Mavunga’s tenacity down low stems from her work in the off-season. He emphasized that she’s in the best shape of her life. Mavunga said that she practices in a hoodie most of the time.

With the hoodie on, she feels heavy. The hoodie has helped her gain this quality physical condition, though. The rebounds that she fights for inside don’t tire her out.

“I just run faster, I feel like I have more stamina,” Mavunga said.

The Buckeyes struggled to make shots, but they are the No. 5 team in the country for a reason.

After coming off a season in which it lost in the Sweet 16 to Notre Dame, Ohio State has returned eight upperclassmen for this season.

Including Mavunga, the Buckeyes had four players score in double figures. Senior guard Kelsey Mitchell led the team with 30, and Sierra Calhoun and Linnae Harper both had 15.

At one point, Mitchell didn’t even realize she was in double figures because of her average shooting night. Mitchell shot 43.4 percent from the field and 27.2 percent from three.

Mitchell and the Buckeyes have Mavunga to thank.

“Steph made it better for all of us,” Mitchell said.