Cierra Hooks: A premier defender with the potential to be one of Ohio’s greatest players ever 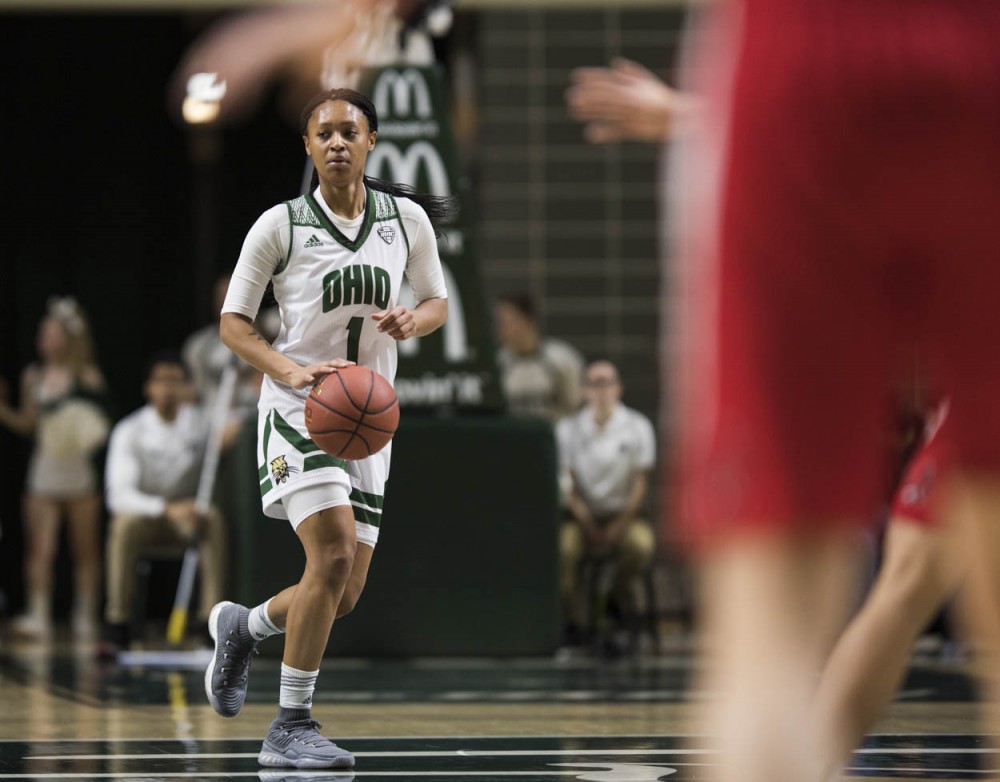 From the Ground Up

Ohio University’s Cierra Hooks dribbles the ball during Ohio’s game against The Ballstate Cardinals on Feb. 3rd. The Bobcats defeated the Cardinals 80-76.

The ball was put in front of her, and Cierra Hooks snatched it.

With under 10 seconds left in the game Jan. 24, Hooks defended Northern Illinois guard Courtney Woods. As Woods neared half-court, she dribbled the ball in front of Hooks.

It was stripped from her hands.

Hooks stole the ball, and she raced to the other end for a layup. The Huskies missed a jump shot on the other end, and the Bobcats won 77-75. As the clock hit zero, Hooks’ teammates met her half-court and wore smiles as they celebrated the win.

For Hooks, a freshman guard, it was the second time this season that she stole the ball and scored a game-winning layup. The first time was against Marshall, when Ohio won 54-52. As the Bobcats’ best defender, Hooks has cemented a spot in coach Bob Boldon’s rotation.

With her quickness, Hooks can guard anybody. She’s the leader of a defense that boasts the top turnover margin in the Mid-American Conference. But because of her quickness, she can also blow past anybody for easy layups, too. When assistant coach Tavares Jackson was recruiting her, he knew that Hooks had the potential to be special.

“I think the fans here at OU have a lot of exciting moments ahead with her,” Jackson said of Hooks in December. “Because I think it’s just the beginning. I think she’s just scratched the surface of how good she could be.”

James White told Hooks that she was going to be OK. Her recruitment was going to take a hit, but White, Hooks’ older brother, wanted her to know that she would be fine.

During her sophomore year of high school, Hooks and the rest of the girl’s varsity basketball team at Thurgood Marshall High School in Dayton were practicing against the boy’s freshman team. Hooks tore her meniscus during the practice, and she missed most of her sophomore AAU season with All Ohio Black, the team she played for.

She didn’t know if she’d ever regain her quickness and return to normal. White told Hooks that it’d probably take about a year and a half for her to feel normal again.

After receiving interest from Ohio State, Xavier and Cincinnati, among other schools, Hooks chose Ohio. In coach Bob Boldon’s system, one that possesses a bevy of shooters and ball handlers, Hooks has thrived.

“They have a lot of shooters, and her best ability offensively is slashing,” White said in a phone interview. “I think she’s the best slasher in the country.”

White knows Hooks well because he taught her how to play basketball. White said that Hooks’ father wasn’t around, so he became a father figure for her. The two are nine years apart, and they’d frequently play NBA 2K in White’s room. Hooks would usually choose the Cleveland Cavaliers or the Phoenix Suns. LeBron James and Steve Nash, who played for the Suns, are her favorite players.

Hooks doesn’t like to lose, and she didn’t back then, either. White said that sometimes he’d let her win to keep her happy.

When White played in AAU tournaments, Hooks would travel with him frequently. During halftime, Hooks would go shoot on the floor. Hooks wanted to play basketball, too, so she began playing during the third grade. White has been training her since. They would go to the YMCA and play against each other.

Throughout that time training her, White noticed that Hooks had natural speed. Hooks ran track during the sixth grade, but that was the only year she ran.

“I think that (speed) was born in me,” Hooks said.

White said that Hooks would get almost 10 steals a game when she was little.

“She was the fastest thing I’ve ever seen in my life,” White said. “And she had good height, so it was like she was gliding on the court.”

The first career-high in points Hooks set this season was 22, which she scored on the road against Western Michigan. She scored 15 points in the third quarter and didn’t miss a shot, using her crossover and quickness to drive past defenders for layups.

Since then, Hooks has continued to shine. Though she was one of the first players to come off the bench, Hooks has started the past four games. Redshirt senior guard Taylor Agler, who usually starts, has been recovering from an injury.

Hooks’ first start was Feb. 3, when the Bobcats played Ball State at home. The Bobcats were in another close game, as they led 54-49 heading into the fourth quarter. Junior guard Dominique Doseck fouled out in the third quarter, and Agler fouled out with under seven minutes left in the game.

Hooks was one of the few ball handlers left, and she had four fouls. She knew that she couldn’t foul out.

“I wanted to win, so I had to be smart about it,” Hooks said after the game.

She was. Hooks didn’t foul out, and she made 10 free throws in the fourth quarter to help the Bobcats maintain the lead. She set a then career-high of 28 points and grabbed 11 rebounds.

Hooks has 79 steals this season, and she leads the MAC in steals per game (3.3).

“She’s really a special player on the defensive end,” Jackson said. “And I don’t know if I’ve seen anyone in my years of coaching quite like her in terms of how they affect the game defensively.”

Hooks’ quickness allows her to play tight defense, and it also allows her to easily drive to the basket. But as she continues her career, she still has facets of her game to improve on.

Shooting the ball better will be important for Hooks. She’s a freshman now, but once teams start preparing for her more, they’ll begin to sag off and let her shoot. She’s has shot 21 3-pointers this season and has only made three of them.

For Hooks, though, it’s about having the confidence to shoot more jumpers. She’s had open jumpers sometimes, but she’ll usually not take the shot.

“When she misses a couple shots, she kind of get down on herself,” White said. “She get an open shot, she probably won’t shoot the next one if she missed the last two.”

Still, White knows that Hooks’ jump shot will come eventually. He has high expectations for Hooks, the sister he’s trained since she was in elementary school. For this season, he wants her to win MAC Freshman of the Year. That’s a realistic achievement, particularly considering Hooks’ expertise on the defensive end.

But for Hooks, who has led Ohio’s top tier defense this season, the ultimate goal is much greater. And it’s also another realistic one.

“The goal is to be Ohio’s best women’s basketball player ever. That’s the goal,” White said.