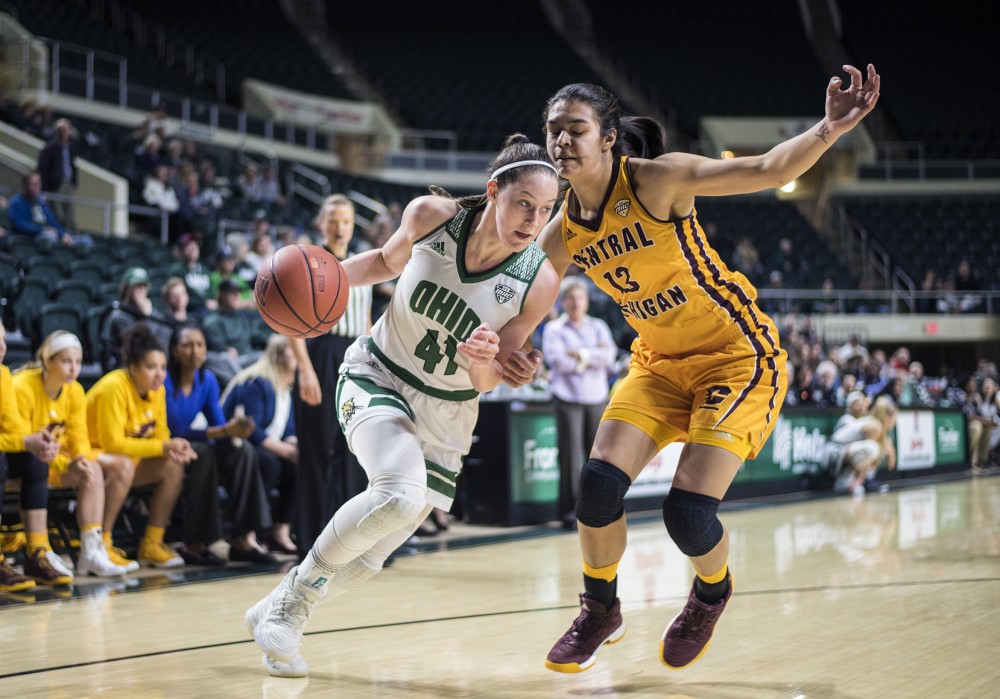 The Value of Patience

Ohio’s Gabby Burris drives to the hoop during the Bobcats’ game game against Central Michigan on Feb. 7th. The Chippewas defeated the Bobcats 74-72.

After Ohio defeated Bowling Green 70-63 on Jan. 20, coach Bob Boldon knew his team needed to improve on stringing together possessions.

The Bobcats started the game down 11-0, and they didn’t score until freshman forward Gabby Burris made a 3-pointer with 6:49 left in the first quarter. Throughout the game, the Bobcats went through stretches of low offensive output — they weren’t scoring enough points when they needed to.

Ohio scored nine points in the third quarter, but it surged in the fourth and scored 26. The Bobcats will play the Falcons at home Saturday at 1 p.m. It will be the last game of the season series, and this time the Bobcats will need to run patient yet aggressive offense. That’s the type of offense that’s given them success.

The Bobcats don’t like to play fast for most of the game. Still, they’ll take opportunities to run when opportunities are present.

But Ohio thrives when it controls the pace of the game.

The second quarter was different, though: The Bobcats committed 10 turnovers in the quarter and needed to regain control of the game’s pace.

In the second half, though, Ohio returned to the style of play it had in the first quarter. Though the Golden Flashes continued to be physical, the Bobcats were patient. They took care of the ball better and earned good shots.

When the Bobcats played the Falcons in January, the game wasn’t as fast compared to others the Bobcats have been in this season. But the Falcons did play good defense, which caused the Bobcats to falter on the offensive end.

With 1:11 left to go in the third quarter against the Falcons, the Bobcats had only scored four points in the quarter. But with a little over a minute left in the quarter, Amani Burke made a layup, and, shortly after, Katie Barker made a 3-pointer.

Ohio’s offense isn’t built to score a whole bunch of points against the Falcons. But it is built to be patient and aggressive when opportunities present themselves.

Playing that style, the style that has proven to work will be imperative Saturday.