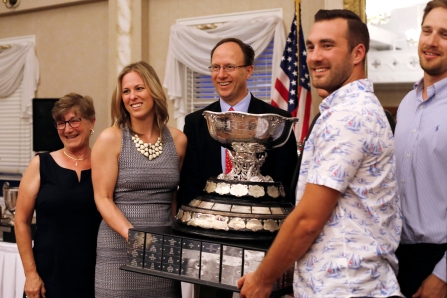 Brad D’Arcangelo didn’t expect to win the Invitational Mills Trophy Race in 2016 — but he did.

And when D’Arcangelo and his crew won the race again in 2017, he was just as surprised.

On Wednesday night, D’Arcangelo was recognized as the winner of last year’s race at the Toledo Yacht Club’s annual pre-race banquet. The 95th running of the Mills Trophy Race will start at 5 p.m. Friday.

Boats will travel to the Toledo Harbor Light, where the race will begin. The Mills Trophy Course is 67.8 nautical miles, and it will end at Put-in-Bay in the Lake Erie Islands.

D’Arcangelo and his crew aboard Consigliere will have a chance to win the race for a third straight year. The last time a boat won the race three years in a row was from 2013-2015, when Terry McSweeney and Trey Sheehan sailed aboard Flat Stanley. From 1986-1989, a boat called Tomahawk won the Mills Race PHRF class.

PHRF, or Performance Handicap Racing Fleet, is owned by the United States Sailing Association. PHRF has different committees across the country that assign handicaps to different boats in various PHRF classes.

Though D’Arcangelo has a chance to three-peat, his desire to race doesn’t stem from the chance of winning a prestigious trophy.

D’Arcangelo, 48, has raced in the Mills since he was 17 years old. He’s a Mills Master, a title that’s given to skippers who have raced in 25 or more Mills races.

As the evening began with a cocktail party in the yacht club’s lobby, some of D’Arcangelo’s crew members talked in the lobby and spoke of how they felt about winning the past two races.

“I’ve only done it so many years, and winning it twice now is incredible,” said Brian Rossnagel, one of D’Arcangelo’s crew members.

For the past two years, D’Arcangelo’s boat has been one of the slowest in its class, particularly in terms of handicap. The boats in the race are different sizes, and some are faster than others. Since the boats vary in size and speed, a handicap is assigned to each boat to even the field.

Still, what has helped D’Arcangelo and his crew win is favorable weather conditions. D’Arcangelo said that in the past two years, Consigliere has fared well partly because it took advantage of a fair amount of “reaching.”

Reaching occurs when the wind is off to the side of the boat. D’Arcangelo said that the wind was above 10 knots, and he and his crew weren’t going upwind or downwind, so they were able to use the boat’s 35-foot length well.

D’Arcangelo said on Tuesday that he’s expecting light-to-moderate conditions and about 7-10 knots for Friday’s race.

“That’s not as favorable as I would like,” he said.

Still, D’Arcangelo and his crew want to compete in their boat’s class. Along with being recognized as the 2017 Mills race winner, D’Arcangelo was also the Toledo Yacht Club Cup winner for having the best corrected time in the PHRF C class.

What D’Arcangelo and his crew value are continuing to work Consigliere hard, even if weather conditions aren’t favorable. When he and his crew head out on the water, they’ll be competing in their class as best as possible.

“That’s why I race, is the competition,” D’Arcangelo said.