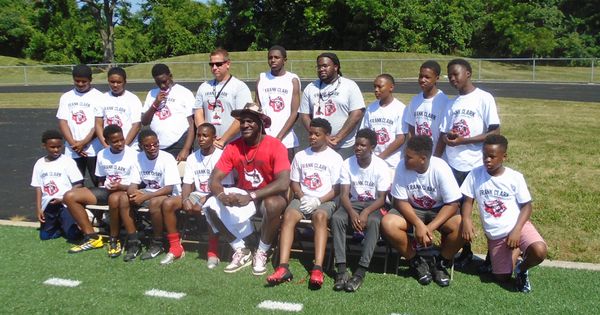 CLEVELAND, Ohio – Frank Clark stood on the field in front of about 300 children at Robert Bump Taylor Field Saturday morning. He wore a red camp T-shirt with his name on it, and though the heat hadn’t come just yet, he sported a bucket hat.

Clark was about to start his first football camp since he was drafted by the Seattle Seahawks in 2015. He graduated from Glenville High School in 2011, and he was back in the city to help his community.

“No matter what nobody tell you, just keep on going, keep on running through the wall,” Clark said to the children. “You keep on fighting and you gonna get to where you want to be in life.”

Clark hosted a free football camp for boys and girls grades 1-8. He personally funded the camp, and participants received instruction in various drills from him and local coaches. Each camper also was given an autographed card from Clark.

A defensive end preparing for his first season with the Kansas City Chiefs, Clark is passionate about doing what he can to help his city and the community’s youth.

“I said I wanted to be able to give them a free camp until the day I die,” Clark said. “That’s one of my goals, and I’m going to continue to do that.”

Clark is one of the highest-paid defensive ends in the NFL, as he signed a five-year, $105.5 million contract with the Chiefs after he was traded to the team in April. The contract comes with $63.5 million guaranteed.

Last season Clark ranked seventh in the NFL in sacks (13), and his 32 sacks over the past three seasons is ninth among active players. He has 35 career sacks.

But Clark knows what it’s like to grow up in the inner city. He was homeless for parts of his childhood in South Central Los Angeles, and moved to Cleveland when he was 12.

He’s lived in both worlds, and that’s why he wanted to give families in his community an opportunity to have fun for a few hours.

Parents watched their kids from the bleachers or stood near the field. Once it was time for foot races in various age groups, they congregated around the endzone to support their children as they crossed the finish line.

Kenyatta Shirley owns a daycare, and she made the 90-minute drive from Mansfield, bringing her two second-grade boys, David and Prince Phillips. Shirley heard about the camp from one of her friends. Her sons like football and basketball, and she’s appreciative of how Clark interacted with the campers.

“He’s not too high that he can’t still interact with them, that’s real humble,” Shirley said.

Clark started the camp showing his spin technique for coming off the line, and throughout the camp, he talked with children as they worked through drills.

Courtney Waites, a local truck driver, brought sons Kyle and Christian, who are entering the eighth and first grades, respectively. Much like Shirley, Waites liked that Clark was fully engaged.

“He’s definitely very in tune with all the kids here,” Waites said.

Near the end of the camp, the campers played a couple rounds of games, and the camp finished with some of the kids dancing to “Suge” by rapper DaBaby. For lunch, Chipotle was provided, along with fruit snacks and water.

Clark said it was important to be a positive pillar in the community. He wants to make a difference in young lives and putting on the camp is part of that.

He wants children to learn positive messages, hoping what children learn at the camp can keep their minds off being in the streets.

“You can learn just some good habits from being out here,” Clark said. “They can take something away from that. That’s when I can rest and I can know we had a great day at this camp.”