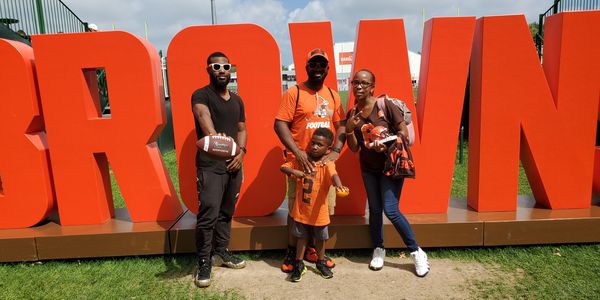 BEREA, Ohio – Before the Cleveland Browns began practice Wednesday, Robert Grays, 37, and his five-year-old son Cristian were hanging out in the family fun area.

Cristian ran the 40-yard dash over and over and played at the obstacle course, too. He also slid down the inflatable the Browns had set up. As practice was about to begin, Grays called him to start their walk to the grandstands.

“No, practice is about to start, let’s go,” Grays said as Cristian tried to play some more.

They were going to meet Grays’ niece Denisha Hopes, 33, as well as her 22-year-old cousin Christopher Hill in the grandstands farther from the indoor facility.

Grays and his family love football and the Browns, and Grays’ late father Amos Levert helped foster that affection. Levert used to work for the Browns during the ‘90s doing administration work, and Grays remembers his father taking him to games at Municipal Stadium. He grew up a fan of former Browns running back/kick returner Eric Metcalf because he was fun to watch.

A Parma Heights native, Grays is passing on his love to his sons Cristian and Robert Jr., who is 10. Grays has brought Robert Jr. to some practices, but not on Wednesday — it was Robert’s first day back at school.

As Grays sat with his family, Hopes and Hill talked about the autographs they wanted to get after practice. Hopes, a Cleveland Heights native, wanted Myles Garrett to sign her jersey. It was Hill’s first time at camp, and he had a football for anyone to sign.

But he had one player in mind that he really wanted.

“Trying to get one from OBJ,” Hill said of Odell Beckham Jr. “That’s the goal.”

The Browns’ last open practice was a relatively light day, as the team didn’t wear pads. As the Browns went through a team drill, Grays and his family talked about the upcoming season.

Hopes is currently a stay-at-home mom, but she has experience as a certified dialysis technician. She didn’t have her infant son, Logan, with her, but she did have his mini Browns helmet to get autographs from players. She said with the Browns expected to be good this season, nosebleed tickets are high. For the Browns’ Week 1 game against the Tennessee Titans, the lowest-priced ticket is currently $150.

I had the pleasure of following Robert Grays and his son Cristian Grays today at Browns camp, along with Grays' niece Denisha Hopes and her cousin Christopher Hill. Here's a video of Grays' son calling out to Rashard Higgins: pic.twitter.com/9nye9pZQ2z

Grays and Hill talked about their hopes for the season, and they were both excited about the potential of Baker Mayfield and Beckham.

“That Baker to Beckham combo gonna be crazy,” Hill said.

Grays said he wants to go to the Week 6 game when the Browns play the Seattle Seahawks.

As the August heat continued to beat down, Grays went for a walk. Shortly after he came back, he pointed out Beckham on the sideline to Cristian. He urged him to try and get Beckham’s attention.

Cristian got up from the bleachers and headed over to the railing at the front of the grandstand. He called out to Beckham a few times, and Beckham turned around and waved.

“That was awesome, you did great,” Grays said to his son as he came back to the bleachers.

Cristian wasn’t finished calling out to players, though. After he got Beckham’s attention, he went to the railing again to call for Damon Sheehy-Guiseppi.

After Cristian called out to him multiple times, Sheehy-Guiseppi eventually turned around and waved.

“Two for two!” Hopes said to him when he returned to his seat.

Cristian got Rashard Higgins to turn around and acknowledge him as well, yelling “Hollywood!”

The day was capped off with Grays and his family getting autographs. Rookie offensive lineman Drew Forbes signed Hopes’ mini-helmet and tight end David Njoku did as well. Njoku signed Hill’s football, too.

Grays was posted by the other set of grandstands, and he was amongst the horde of fans who crowded around Garrett as he signed autographs. He had Hopes’ Garrett jersey with him, but he wasn’t able to get it signed for her.

After she got autographs from Njoku and Forbes, Hopes came down with Cristian to meet Grays on the field. She got her son Logan’s Browns helmet signed shortly before Garrett was finished signing autographs.

“Thank you so much,” Hopes said.