Would you get up at 4 a.m. to watch the Browns? This Australian fan does

By Cameron Fields | Special to cleveland.com

CLEVELAND, Ohio — The Cleveland Browns have one of the NFL’s most loyal and fervent fan bases and have followers around the country and around the world. They share a long tradition that has seen championships and winless seasons and everything in between.

With the optimism around the 2019 Browns, cleveland.com wanted to find a way to introduce all of you to each other, Cleveland residents to international transplants, from fans of Otto Graham to fans of Odell Beckham Jr.

So in the spring, we asked you to tell us “Why I’m a Browns Fan.” More than 600 of you responded. Today, we’ll share another one of your stories as we wind through the 2019 season.

The authors of these essays have one thing in common: their love for the Browns.

By the time we’re through, we plan to tell all your stories. 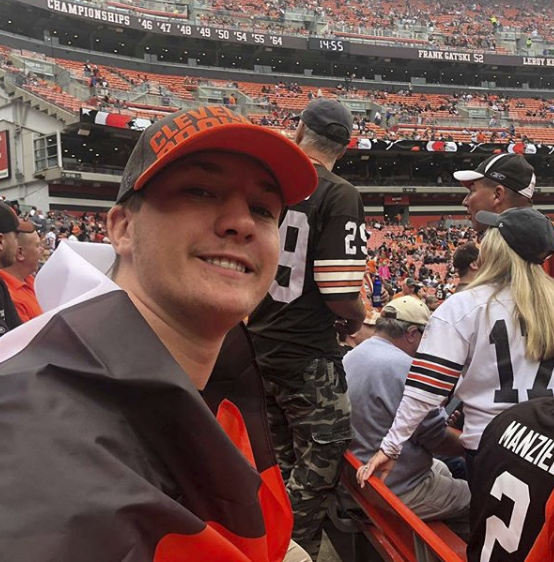 Australian Jasper Long is shown at a Browns game during the 2018 season. He has been a fan for years.

Long, 18, is a rising college student who will be attending the University of Sydney next February. He will study construction management, and in the future, he wants to work on developing cities.

Long has been a Browns fan for about the past 10 years while growing up in Sydney. One of his friends had lived in Seattle for a bit and is a Seahawks fan, so Long sometimes watches the Seahawks with him as well.

Why He’s a Browns Fan

When Long was 8 years old, his uncle returned to Australia after living in San Francisco. Long’s uncle came back to Australia loving football and the San Francisco 49ers, and he introduced Long to American football.

Long said the National Rugby League is Australia’s leading sports league, and he likes watching the Wests Tigers, whose colors are orange and brown, the same as the Browns.

When he chose to be a Browns fan, though, he said he wanted to be different than other Australian football fans.

“Yeah so what you’ll find when you come to Australia is literally everyone goes for either the Patriots, the Rams or the Raiders pretty much, or the Saints,” Long said in a Skype interview.

Another reason Long said he became a Browns fan was because he was familiar with Cleveland. His dad had been to the Rock & Roll Hall of Fame before.

“Picked Cleveland, and then yeah just over time, I’ve just fell more and more in love with especially the Browns, but just the city of Cleveland as well.”

Throughout his time of being a Browns fan, Long has exhibited great dedication. Sydney is 14 hours ahead of Ohio, so it’s already Monday there when it’s Sunday in Cleveland.

Long said for about the last six years he’s gotten up at 4 a.m. to watch the Browns during the first six weeks of the season. He said Australia only has NFL RedZone available on TV, so he watches on his laptop through NFL Game Pass.

“Most Mondays it puts me in a pretty bad mood, but last year there was a few Monday mornings which put me in a good mood for the week,” Long said.

A fan of Myles Garrett, Jarvis Landry and Nick Chubb, Long is part of a Browns Backers chapter in Sydney that has over 100 members.

He said each year the chapter goes over to the home of one of the group’s leaders in the morning to eat pancakes and watch the Browns.

Since the NRL is Australia’s main sports league, Long said he believes people are drawn to the NFL because it helps fill the sports void. The NRL regular season ends right before the NFL’s begins.

Last season Long got his first taste of seeing a Browns game in person. He said he worked a part-time job last year, and with help from his mom, he came to Cleveland to watch the Browns play the Baltimore Ravens in Week 5.

“That Browns game against the Ravens was one of the best days of my life,” Long said.

The Saturday before the Browns game, Long said he went to watch the Ohio State Buckeyes play at home against Indiana. This year, he hopes to return to Ohio to watch the Browns play the Cincinnati Bengals on the road during Week 17.

Long is hopeful the Browns can make the playoffs this season. Throughout his years watching the Browns, last season was one of the team’s best.

“If they can make the playoffs, I’ll be really happy,” Long said.