CLEVELAND, Ohio – The Cleveland Cavaliers are ranked sixth in paint touches, according to NBA.com stats. The Cavs can get the ball inside, but they have not been able to consistently succeed in the lane on offense or defense.

The Cavs’ struggles to score and defend continued Monday in their 108-106 loss to the Brooklyn Nets.

On offense, the Cavs got the dribble penetration they needed, but didn’t convert often enough. With 6-foot-11 center Jarrett Allen manning the paint, he and the Nets contested shots, making it difficult for Cleveland to finish at the hoop.

According to NBA.com stats, Allen alone was responsible for 28 of Brooklyn’s 82 contested shots against the Cavs.

“Their rim protection was the difference maker in the game,” coach John Beilein said. “We could get to the rim, but we couldn’t finish there all day long, and that’s a big thing for us. To get the 106 points that we got without really getting much at the basket is good.”

Collin Sexton is one of the Cavs’ most deft drivers. He leads the team in drives with 11.3 a game, but he doesn’t necessarily convert well on his drives. According to NBA.com, he scores 6.9 points per game on them. Per NBA.com stats, the shot chart below shows Sexton had two shots blocked in the paint. 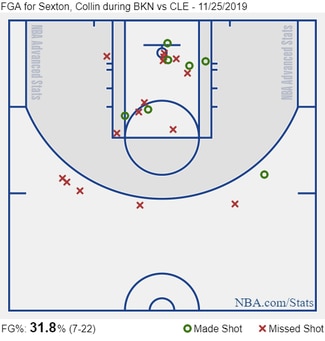 One of Sexton’s drives, though, was one of the most important of the game. With about two minutes left, Sexton drove and was fouled by Spencer Dinwiddie. He made the shot and converted the three-point play. The play brought the Cavs within six points.

Though he scored a timely bucket, Sexton can still improve his shot selection at the rim. After the game, he said working on making the right reads against bigs will be what helps him attack better.

“Just reading the big guy. If he’s down, then shoot it. If he’s up, then pass it,” Sexton said.

Aside from the team’s woes inside on offense, the defensive struggles have been just as, if not more, prevalent. The Cavs gave up 60 points in the paint against Brooklyn, and it marked the third time this season the team has allowed 60 or more points inside. They’re tied for 26th in opponent points in the paint (51.3).

The Cavs don’t have many bigs available because of injuries. Kevin Love missed his second straight game because of a lower back contusion. John Henson has been sidelined with a right hamstring strain since the end of October.

Ante Zizic is back from a plantar fasciitis injury, but he has only played four games since his return. Larry Nance Jr., who started for a second straight game, re-aggravated a left thumb injury in the Cavs’ Nov. 14 home loss to the Miami Heat.

Nance and Tristan Thompson got all the big man minutes Monday night. Nance is better at playing power forward, but for stretches he had to play center.

“It’s just next man up mentality,” Nance said. “Obviously with (Kevin Love) out, there’s a pretty big void to be filled. I’m just doing my best to help us in anything I can do, whether that’s rebounding. If we need some extra floor spacing, I’ll do the best that I can at that.”

Nance scored a season-high 20 points and grabbed a team-high 13 rebounds. With his 3-point shooting improving, he’s certainly a key player for Cleveland. But he’s not the best paint defender.

According to NBA.com stats, Nance contested seven shots against the Nets. The Cavs miss Henson, who is supposed to be their anchor down low. In his absence, Thompson has been a quality interior defender, though. He’s averaging a career-high 1.4 blocks, and had a team-high 17 contested shots against Brooklyn.

In the end, the Cavs are simply a small team, needing to play smart and hard on both ends. It’ll require Sexton and other guards being more cognizant near the rim as bodies fly around down low. Nance said Sexton showed improvement in that area during the fourth quarter.

“I thought Collin (Sexton) made a couple really key passes out once he got in the paint,” Nance said. “And then to see him go finish that and-one was really good, too. To kind of see the growth, the progression of his looks.”

As for the defensive end, lacking a true rim protector puts more pressure on the guards and wings to play stout defense. With the Cavs currently lacking size down low, that’s something they’ll simply have to deal with until they get healthy.