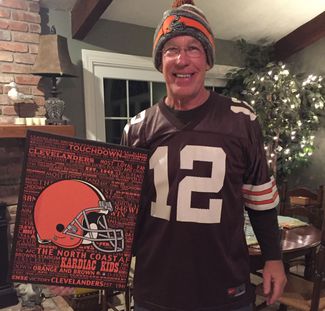 Michael Drake, 70, listened to the Browns 1964 championship game on a transistor radio.

CLEVELAND, Ohio – Browns fans from around the country and the world have rooted on their favorite team through the good and bad times.

Fans have seen the Browns win championships and be playoff contenders. But recently they have seen a series of losing seasons.

The Browns haven’t been to the playoffs since 2002, but fans remain loyal and are arguably the most loyal NFL fanbase. During the spring, we asked you to share your story of “Why I’m a Browns Fan.” More than 600 sent in submissions. Today, we’ll share another one of your stories as the last week of the NFL regular season comes around.

The authors of these essays have one thing in common: Passion and enthusiasm for the Browns. By the time we’re through, we plan to tell all your stories.

Today’s fan is Michael Drake, who lives in Bellingham, Massachusetts, with his wife, Kathy.

Drake, 70, is a retired high school physical education teacher. He worked for 35 years at Blackstone-Millville Regional High School in Blackstone, Massachusetts, where he also was the health teacher, soccer coach and basketball coach. Drake was also the school’s athletic director for 10 years.

After spending 35 years at the Blackstone school, Drake went to work at a private school in Rhode Island for seven more years.

Drake and his wife have three children and five grandchildren.

Listening to the 1964 title game on the radio

Drake grew up in Hudson, Ohio, and attended Hudson High School. In 1961, Drake and his father went to a father-son banquet at the Hudson congregational church. While they ate dinner, Lou Groza went up to speak. Drake was encouraged by his father to ask Groza for an autograph, who provided one.

“I didn’t really get it as far as pro athletes and all that kind of stuff,” remembered Drake, who said it sparked a curiosity. “So now I start following the team.”

In 1964, Drake was in the ninth grade and the Browns were playing in the NFL Championship against the Baltimore Colts. It was coach Blanton Collier’s second season with the team, and the Browns hadn’t been to the title game since 1957.

The game was in Cleveland, and Drake couldn’t understand why the game wasn’t televised, thanks to the NFL’s blackout rules.

“My father and I sat in my dad’s bedroom and listened to the entire game on a transistor radio,” Drake said. “So it was a 0-0 halftime, and then Gary Collins gets three passes for touchdowns, and they win.”

The game was replayed on TV the next day. Drake got to watch, and has been a Browns fan since.

As he got older, he made more Browns memories, including one time when he and his girlfriend went onto the field after a game in 1966. The Browns played the New York Giants, and it was their last home game of the season.

“I shook hands with Erich Barnes,” Drake said. “Leroy Kelly came walking by me, and I tapped him on the shoulder pads. And then we all decided we were going to rip down the goal posts, even though we weren’t going to a championship. And so, the goal posts were surrounded by mounted police at one end. So we ran to the other end, and there were more mounted police at that end, so we didn’t rip them down.”

Later, now relocated in Massachusetts, Drake made a memory in 1983 with his 5-year-old son, Brian. The Browns defeated the New England Patriots at the former Schaefer Stadium in Foxborough. Brian Sipe was the Browns’ quarterback at the time, and it was his last NFL season.

“After the game I was able to go to the buses where the visiting team would be exiting,” Drake said. “And so the security guard let me go by. And so, I introduced my son Brian to Brian Sipe. He got an autograph from Brian Sipe.”

With Drake being a Browns fan since 1964, the year of the team’s last championship, he’s seen the good times. But remaining a fan means experiencing some tough seasons.

“Of course, we all have endured The Drive, The Fumble, the Red Right 88, and all that kind of stuff,” Drake said. “But it was really exciting being a fan in those days. It was really, really something.”

Drake has been part of the Southern New England Browns Backers since 1999. The group meets at a bar and grill called The Shade in Windsor Locks, Conn. Drake doesn’t go every Sunday, but he has a good time when he’s there.

“We have our own room, we all are in some sort of Browns attire,” Drake said. “We have a raffle at halftime. It’s a fun, fun way to watch the games.”