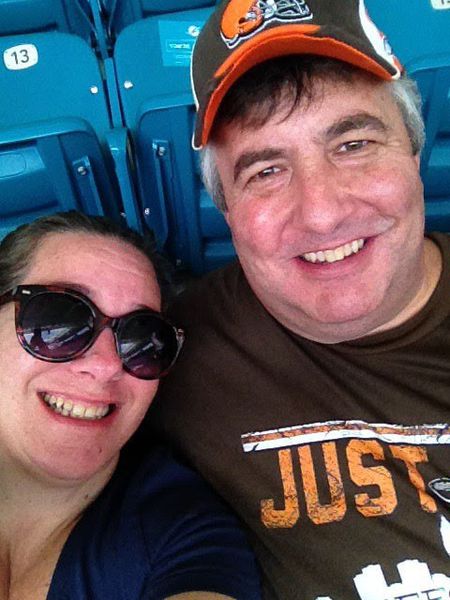 Robin and Joe Monti at the Browns and Dolphins game in Miami during 2016.

By Cameron Fields, special to cleveland.com

CLEVELAND, Ohio – Joe Monti was different than most fans while growing up in football-loving Lewis Run, Pennsylvania, a patch of the state filled with Steelers fans.

Like most younger brothers, Monti grew up wanting to follow his older brother, John. He joined John in becoming one of the few Browns fans in his hometown, which is about a three-hour drive to Pittsburgh.

Monti, 53, currently lives in Winter Springs, Florida, a suburb of Orlando. He’s been married to his wife, Robin, for 18 years and has a stepson and stepdaughter.

An employee at Rollins College, Monti works with a fundraising team for the school, and he’s had similar work with other small colleges during his 30-year career. Despite being loyal fans, Monti and his brother have never been to a Browns game together, but they do talk over the phone and through email about the team. John, 65, lives in Meadville, Pennsylvania, with his wife, Roseann.

The two brothers don’t get to see each other much, and Monti said they haven’t watched a game on TV together since he was a kid.

“Complain to each other, ‘oh my God, I can’t believe they did this,’” Monti said. “Or why did they do that, or what do you think the Browns are going to do this year? Sometimes we just email “woof” to each other, and that makes us feel better.”

The past decade was filled with historically bad seasons for the Browns, including the dismal 1-31 stretch in 2016-17. But John did see the Browns win the NFL championship in 1964, so he knows about the glory days. As Joe and his brother wait on the team’s first Super Bowl, John reminds him of how the Browns used to be prosperous.

“I know that they did it before, and that helps me think that they’ll do it again,” Monti said.

At the same time, Joe admits it’s hard sometimes to maintain optimism. In those moments, he eventually decides that being a Browns fan is simply a part of him.

“I’m enthused now about the new coach,” Monti said of Kevin Stefanski. “We’ll see how that goes. I don’t know what it is. I guess it’s just ingrained in me that you gotta support that team and you gotta be positive about it.”

Joe Monti said when growing up in Lewis Run, his late father, who didn’t particularly have a favorite team, didn’t understand why he and his brother rooted for the Browns. But as the younger brother, Monti just couldn’t avoid following his brother’s lead. When John went to college in Pittsburgh, Joe remembers hearing John’s disdain for the city.

“Visiting him at college, I kind of got hatred for the city of Pittsburgh,” Joe said. “It was in the early and mid 70s, when it was still smokestack crazy with all the steel. But it was also when the Steelers were becoming the power that they became, and all my friends were Steelers fans, so that was terrible.”

The Steelers won Super Bowls in 1975, 1976, 1979 and 1980. The Browns were good in the 1980s, and respectable in the 1990s until the move to Baltimore. But the trajectory of that competitiveness has only gone down in the 21st century. Still, Joe Monti has earned respect from his friends and colleagues because of his loyalty to the Browns.

“Well, it’s been frustrating for sure,” he said. “I will say that my friends and colleagues here in central Florida who’ve seen me for the last 18 years suffering with this team, they certainly poke fun at me and they’ve got their own teams and we argue about that. But then they do begrudgingly admit that they admire the loyalty and stick-to-itiveness that I show, so that makes me feel good.”